Libya has become a major headache for European oil companies as a four-year conflict forced BP to join Total in writing off millions of dollars in investments in the North African country.

BP on Tuesday the 28th of July said it had taken an impairment of almost $600 million in the second quarter as fighting forced it to suspend an oil exploration campaign. The unexpected charge was the main reason BP’s earnings fell short of analysts’ estimates.

“There is significant uncertainty on when drilling operations might be able to proceed,” London-based BP said in a statement. 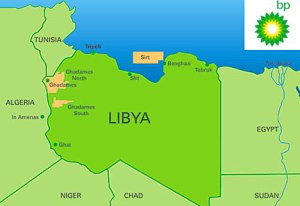 The charge comes three months after Total became the first European oil major to take an impairment in Libya, writing off $755 million from onshore assets. That’s an ominous sign for firms including Eni SpA and Repsol SA, which have yet to mark down the value of their assets in the country.

. Militias backed by rival governments in Tripoli, the capital, and Benghazi, the main city of eastern Libya, have this year attacked oil fields and terminals that were largely spared during the initial phase of the uprising. Es Sider and Ras Lanuf, the nation’s largest and third- largest oil export ports, have been shut down since December following attacks. In February, gunmen stormed and briefly captured the Al-Mabruk field operated by Total. Eni, which reports first-quarter results on Thursday, has sustained output in Libya despite growing insecurity. Like the Italian company, Madrid-based Repsol hasn’t written down its assets in the country, although it has suffered from intermittent production outages. BP returned to Libya in 2007 after a more than 30-year hiatus, signing a deal with the country’s state-owned oil company to spend $900 million searching for oil and gas in a portion of the country the size of Belgium. The deal was part of the international rehabilitation of Libya after the Qaddafi regime gave up its program of weapons of mass destruction and paid compensation to the victims of terror attacks. Libya is producing less than 400,000 barrels a day as the conflict that has divided the North African country cuts electricity supply to oil fields and prevents maintenance. Before the revolution, Libya pumped about 1.6 million barrels a day.

If #US involvement in #Libya was about securing flow of #oil it wasn’t very successful cc: @VictorCleaner pic.twitter.com/ed4oxu6veH