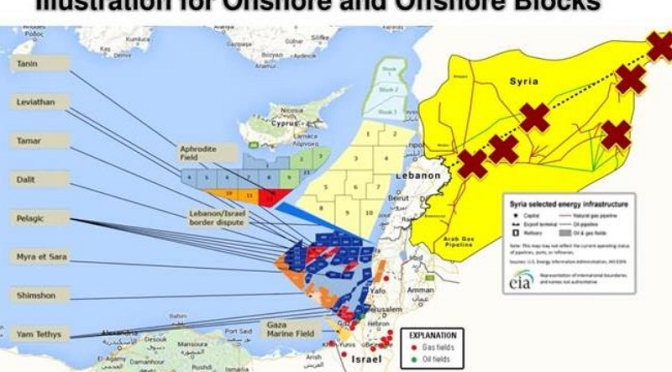 Reuters reported yesterday, that Lebanon intends to restart its first oil and gas licensing round after a three-year delay, the energy minister said on Thursday, hoping to kick-start the development of a hydrocarbon industry stalled by national political paralysis. END_OF_DOCUMENT_TOKEN_TO_BE_REPLACED

On the 6th of August 2015, the enlargement of the Suez Channel was inaugurated. The Suez Canal is one of the most important waterways in the world: 17483 ships transited in 2015. It is also the most potent corridor for invasions by marine species known in the world. END_OF_DOCUMENT_TOKEN_TO_BE_REPLACED

Our story starts with this short film, which was an initiative of the Committee of Cyprus Occupied Municipalities, portrays the destruction of the cultural heritage of Cyprus by Turkey that has been taking place in the northern part of Cyprus since the Turkish military invasion in 1974.

The 1974 war in Cyprus was a result of a bi-communal violence started when the Greek majority wanted to unify the island with Greece, something that was not a desire for the Turkish Cypriots. During the last 10 years before the events of July 1974, were marked by bi-communal violence, Greeks fled from Turkish majority villages,Turkish fled from Greek majority villages, houses burnt, greek militia that wanted the unification with Greece killed a lot of Turkish Cypriots as well and even greeks who insisted for an independent state . Massive graves of Greek or Turkish bodies are dispersed into the island and some of them still remain to be found.

Even if Turkey bears the sole responsibility for the present condition of hundreds of archaeological and religious monuments in the occupied areas: hundreds of religious monuments have been desecrated, looted or demolished; a significant number of churches have been converted into mosques, stables, dance studios, storehouses and one of them has become a morgue we must search further to see what caused the war.

Moreover, several archaeological places that were famous and recognized throughout the world were destroyed or illegally excavated while a great number of antiquities were smuggled and remain unfound until today.

The international community agrees that the status quo is not acceptable and has called for an end to the arms race which has turned the island of Aphrodite into one of the most heavily militarized pieces of real estate in the world.

Greek Cypriots have long believed the Americans were to blame for failing to prevent the bloody events of 1974, which left the island “ethnically cleansed” long before the phrase was conjured up.

Back in 1999, In Washington congressmen demanded to know why their country, as the main supplier of arms to Greece and Turkey, both Nato partners, was allowing one country to usurp democracy in a friendly state and the other to occupy a slice of its territory, bringing both to the brink of war. In London MPs cross-examined foreign secretary James Callaghan on why Britain, as a guarantor of Cyprus’s independence,was asking why the UK with two military bases, numerous spying facilities and thousands of troops on the island, took no military action to prevent the crisis. But no one could cut through the shroud of secrecy that descended on the subject. MPs concluded: “The full truth will never be known unless, and until, all official papers of the period can be seen.” These papers came out in 2007.
END_OF_DOCUMENT_TOKEN_TO_BE_REPLACED

It’s an undeniable fact that Turkey is in a hasty attempt to overcome its long isolation which has been led to from Erdogan’s policy, mainly to solve its important energy problems that grows and threatens with a complete collapse of the Turkish economy , and as well it tries to undertake a significant shift attempt to change its foreign policy despite occasional fierce criticism of what Erdogan is saying about Israeli policy towards Gaza and the Palestinians.