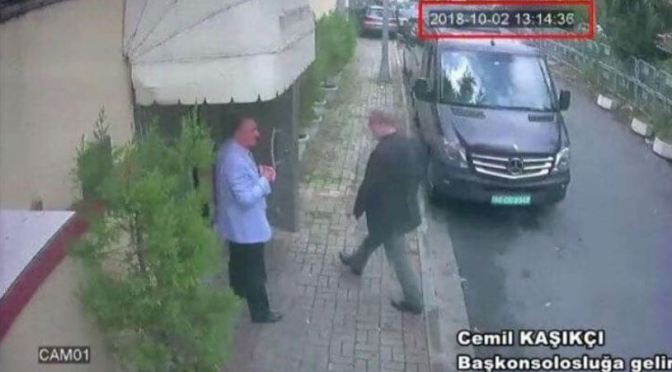 Jamal Khashoggi, a well-known Saudi Arabian journalist and Washington Post columnist who has been critical of his country’s government, disappeared last week.

His disappearance is straining Turkey-Saudi relations and could complicate Saudi Crown Prince Mohammed bin Salman’s recent attempts to recast his government as forward-thinking and reform-minded — as well as his country’s close relationship with the US.The incident has thrown sharp focus on Saudi Arabia’s young Crown Prince Mohammed bin Salman’s perceived crackdown on dissidents, his kingdom’s delicate relationship with Turkey, and Khashoggi ‘s influence within the royal court.

The 59-year-old veteran journalist was last seen on Tuesday, October 2, (photo) walking into the Saudi Consulate in Istanbul. He was there to obtain a document verifying his divorce from a previous marriage so that he could remarry a Turkish woman.

But what happened next is a mystery. Saudi Arabia has strenuously denied any involvement in Khashoggi’s disappearance.

Anyhow here is #JamalKhasoggi going into the embassy at 13:14. Embassy closes at 15:30. There is no video of him coming out. Saudis say he went out: Therefore SA has to prove it

Turkish officials said over the weekend they have “concrete” evidence that the Saudi writer  was killed in the consulate and his body was then clandestinely taken out of the country. Some media have even put forth gruesome theories of how his body may have been dismembered and smuggled out.

The Saudi government, however, says that they had nothing to do with his disappearance and maintains that he left through a back entrance. However, who could trust the Saudi government which during the past year forced the libanese president Mr Hariri to resign while holding him hostage on its ground.

Turkish President Recep Tayyip Erdogan demanded Monday that Saudi Arabia prove that journalist Jamal Khashoggi left the Saudi Consulate in Istanbul on his own, as Saudi officials have repeatedly asserted, after he disappeared last week while inside the mission.

Erdogan’s comments were his most direct suggestion yet of potential Saudi culpability in Khashoggi’s disappearance. But other Turkish officials have said they believe that Khashoggi was killed by Saudi agents inside the consulate.

“Do you not have cameras and everything of the sort?” Erdogan said of the consular officials. “They have all of them. Then why do you not prove this? You need to prove it.”

The ambassador was called to the ministry in the Turkish capital, Ankara, on Sunday, the agency said. It was the second time Turkey summoned the ambassador since Khashoggi failed to emerge after a visit to the consulate on Oct. 2.

Turkish officials have said they believe Khashoggi, 59, a critic of the Saudi leadership and a contributor to The Washington Post’s Global Opinions section, was killed by a team of 15 Saudis flown in specifically to carry out the attack. Saudi authorities have called the allegation “baseless.”

A report Monday in the daily newspaper Sabah said investigators were also focused on a convoy of diplomatic vehicles that departed from the consulate on the day Khashoggi vanished. A U.S. official said that Turkish investigators believe Khashoggi was probably dismembered and his body removed in boxes and flown out of the country.

The kingdom’s ambassador in Washington, Prince Khalid bin Salman, told The Post the consulate’s cameras were not recording. But footage from Turkish cameras is believed to be available. Turkish sources have said there are images of Mr. Khashoggi leaving the consulate on a previous visit on Sept. 28 but none from Oct. 2. Formal confirmation of that result from Turkish authorities would support the account of Mr. Khashoggi’s fiancee, Hatice Cengiz, who says she waited for him outside the mission until after midnight but never saw him. It would strongly indicate that the Saudi account is false according to WashingtonPost.

Turkish officials also have disseminated a report that 15 Saudi nationals flew into Istanbul on the day of Mr. Khashoggi’s disappearance and were inside the consulate when Mr. Khashoggi disappeared. A private Turkish news agency, DHA, said the group arrived on two Gulfstreams belonging to a Riyadh-based company and that they landed at Ataturk Airport. If that is true, there should be records of the planes landing, and perhaps passenger manifests and passport records, along with more video from the airport and consulate. Its release would belie Saudi claims that no such delegation visited.

The journalist is known for his interviews with Osaba bin Laden. Khashoggi had followed Osama bin Laden’s career since the 1980s and had interviewed him several times. Khashoggi knew bin Laden during his formative years as a radical Islamist and interviewed him in Afghanistan in 1987 during the fight against Soviet troops and pro-Soviet regime. He also met bin Laden in Tora Bora and lastly in Sudan in 1995.It is reported that Khashoggi once tried to persuade bin Laden to quit violence.

#JamalKhasoggi back in the days when he’d been befriending the Iranian-backed terrorist OsamaBinLaden in Afghanistan. #JamaKhashoggi was asked in 2014 if this pic really belongs to him, he then answered “Yes this is me, I’m proud of that period in my life” pic.twitter.com/jQ3tSSBeiY

The 33-year-old crown prince has tried to paint himself as a reformer by loosening restrictions on women driving and opening up cinemas in the Kingdom, but he’s also led a purge of opposition within his government under the guise of a crackdown on corruption and championed a bloody, brutal war with Yemen that’s left tens of thousands dead.

And despite his reforms, MBS hasn’t shown any willingness to tolerate political dissent or free speech. He’s even arrested some of the activists who championed the reforms he’s pushed through.

Turkey and Saudi Arabia already have a strained relationship, for a few reasons. The gulf monarchy is engaged in an ongoing blockade of Qatar, one of Turkey’s allies, and Riyadh doesn’t agree with Turkey’s embrace of political Islam or its close ties to the Muslim Brotherhood. Khashoggi’s disappearance could escalate matters, and cause either country to cut off diplomatic or economic ties.

These are dark times for press freedom globally. The number of reporters imprisoned and killed has risen. The independence and diversity of the media in many countries is diminishing. New commercial pressures and the growth of the internet at the expense of news publishers are part of the explanation. So are the resurgence of authoritarian politics, and anti-democratic attacks on “fake news”. Turkey has seen some of the harshest repression, which intensified after the attempted coup against President Recep Tayyip Erdoğan in 2016, with titles closed down and many journalists put in prison.

Jamal Khashoggi one of the Afghan Jihad’s prominent journalist have disappeared. Mr. Khasoggi was involved in negotiations between the Afghan factions and covered the war against the Soviets. https://t.co/gas8XActFW 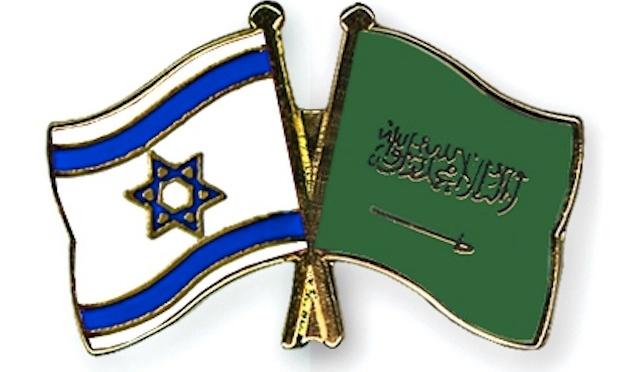 Israel Defense Forces Chief of Staff Gadi Eisenkot recently gave an unprecedented interview to a Saudi news site, in which he asserted that Israel and Saudi Arabia are in full agreement about Iran.

Saudi Arabia currently does not have official diplomatic relations with Israel and abides by an Arab League boycott on trade with the Jewish state.

Since the Arab Spring erupted, and more especially during the past year, Israel and Saudi Arabia have drawn significantly closer, owing to their common interests or common enemies : Hezbollah & Iran. Saudi Arabia’s fear of its enemies is indeed pulling it closer to Israel, but it is limited in its ability to manage these collaborations, at least publicly, as long as the Palestinian problem remains unresolved. And in September, Crown Prince Mohammad bin Salman (MBS), was reported to have made a secret visit to Israel.

In mid-November, Gadi Eizenkot, the chief of general staff of Israel’s defense forces, landed a media coup. He described, in broad terms, how he viewed his country’s relations with Iran on one side and Saudi Arabia on the other. He did so in an interview with the Saudi Arabian website Elaph.

Eizenkot explained that Israel was prepared to share information as well as intelligence material with moderate Arab states in order to counter Iran. He answered the question of whether Israel had already shared intelligence with Saudi Arabia by quoting from a letter of intent: “We are prepared to share information when necessary. We have many common interests.” He did, however, make one thing crystal clear: Iran is viewed by Israel as the “greatest threat to the region.”

In other significant comments, Israeli Energy Minister Yuval Steinitz this week admitted to having discreet contacts with the kingdom. “We have ties that are indeed partly covert with many Muslim and Arab countries, and usually [we are] the party that is not ashamed. It’s the other side that is interested in keeping the ties quiet.

It appears that both countries are being particularly careful about communicating mutual rapprochement through unofficial channels. The fact that Eizenkot granted Elaphan interview can be seen as evidence of a deliberately defensive PR strategy

Saudi Arabia “doesn’t give a damn” about the Palestinian cause, a former Israeli security advisor has said, as long as it can cement a deal with Israel against Iran.

The Kingdom is willing to accept almost any kind of Israeli-Palestinian peace deal, Israeli Prime Minister Benjamin Netanyahu’s former defence minister Yaacov Nagal said in an interview with The Telegraph.

However, the Saudi foreign minister stated in a television interview not long ago that his country does not maintain ties with Israel.He also reiterated the traditional Saudi demand for Israel to enter into regional negotiations on the basis of the 2002 Arab Peace Initiative. Publicly, Riyadh’s position is that Israel must abide by the 1967 Green Line for any such negotiations to take place.

This week, Israeli players have been denied visas to participate in a speed chess championship hosted by Saudi Arabia this week, a vice-president of the World Chess Federation (Fide) has said.

Establishing diplomatic relations would please the charismatic warmonger US President Donald Trump, who counts the two countries as among his strongest allies against the perceived threat from Tehran.While the US seeks to unite Saudi Arabia and other Arab states with Israel against Iran, many Middle Eastern countries are reluctant to get too close to the Israelis without progress on the Palestinian issue.Israelis and Saudis  likewise believe that a reduction in American influence in the Middle East left a power vacuum that risks being filled by enemies. Other overlapping policies include the designation of Hezbollah as a terrorist organization, as well as opposition to Qatari meddling in the region. 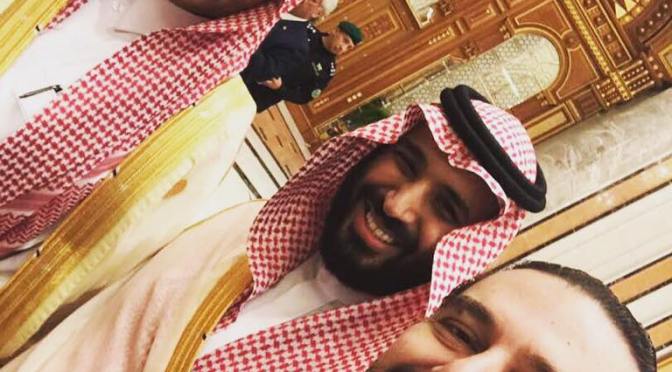 Lebanon was stunned on Nov. 4 and its still in shock when its prime minister, Saad Hariri, speaking from Saudi Arabia, delivered a halting resignation speech. Mr. Hariri said he left Beirut because he feared assassination. He placed the blame for his long-distance resignation on Iran and its main ally in Lebanon, Hezbollah.

Lebanese President Michel Aoun demands answers from Saudi Arabia on why PM Saad Hariri @saadhariri has not returned to the country or if he can leave #SaudiArabia at all. Here's what's going on so far. #Opinion pic.twitter.com/nmoXUPCaB6

END_OF_DOCUMENT_TOKEN_TO_BE_REPLACED 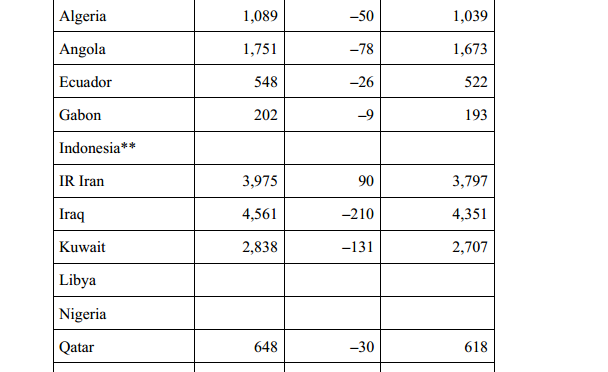 According to Reuters, the Organization of the Petroleum Exporting Countries (OPEC) said Wednesday that it would cut production by 1.2 million barrels a day from 33.6 million barrels and said it expects producers from outside the group, including Russia, to join with additional cuts totaling 600,000 barrels a day. On Thursday, 12/1, Azerbaijan said it was also willing to engage in talks on cuts while Indonesia suspended its membership.