A CUBAN artist’s controversial photographs of children being hung from crosses has landed him in hot water.

Erik Ravelo took a series of photos of children hung like Jesus from a cross, but in the place of the cross were soldiers, surgeons, priests and Ronald McDonald.
The images refer to pedophilia in the Vatican, child sex tourism in Thailand, the war in Syria, the trafficking of black market organs “donated” by children in the third world and obesity.
The project, titled Los Intocables (The Untouchables), was designed to make a point about the state of childhood globally, Ravelo told news.com.au.
Many Facebook users have left comments on Ravelo’s Facebook page complaining of the images being pornographic, despite the fact the children are at least partially clothed.
Facebook has also tried to have the images removed from his page, and have it shut down, but the artist and his users keep reporting the photos.

A Christian, Ravelo says the religious icon of Jesus on the Cross does not belong to any one person or group.

“The religious icon is not someone’s else religious icon,” he said. “It’s my icon too, it’s my culture, it’s my education, it’s the way I was taught to communicate. So, in any case I’m talking about me too.
“I still don’t understand why some people are mad at me, but they’re not mad about those problems. Some people get offended by the photos but not by the problems the photos wants to talk about. 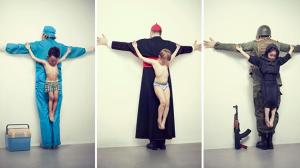